Stella Jean was born and works in Rome, where she lives with her two children. In July 2011 she was  honoured as one of the winners of the prestigious ‘Who Is On Next?’ competition in Rome, organised by Altaroma and Vogue Italia. In June 2013 she debuted her first menswear collection at Pitti Uomo, as part of the Pitti Italics project. In September 2013 Stella Jean was chosen by Giorgio Armani to showcase her designs as a guest at the Armani/Teatro space during Milano Moda Donna, and in April 2014 she was selected by the Victoria and Albert Museum in London to exhibit several outfits from her Spring/Summer 2014 collection at the “Glamour of Italian Fashion 1945-2014″ exhibition. In June 12, 2014, Stella took part in the Fiftieth Anniversary of ITC – International Trade Centre in Geneva, which she attended as a speaker on the ‘Power of Empowered Women’ discussion panel at the Palace of United Nations and, on the same day, presented her garments created in collaboration with the ITC’s Ethical Fashion Initiative project at the World Trade Organization (WTO). In September of that year, Stella Jean presented her creations within the “Fashion 4 Development” project, organised in collaboration with the UN Millennium Development Goals. In 2014 she was also nominated by the Business of Fashion as one of the ‘People Shaping the Global Fashion Industry in 2014″, in the annually published ranking list “BOF 500”, and she was also selected by Fashion Bomb Daily as “Designer of the Year”. In January 2015 she showcased her men’s Autumn/Winter 2015-2016 collection for the first time during Milano Moda Uomo. In June 2015, she participated in the Global Fashion Capitals exhibition at the FIT Museum in New York, exhibiting one of her Autumn/Winter 2014-2015 creations, and in July 2015, she was invited to speak at the Milan Fashion Global Summit 2015. The dresses of Stella Jean begin to travel around the world worn by pop stars like Rihanna and Beyoncé

Stella Jean’s FW 2016|2017 collection describes the socio-anthropological and the artistic parallels between two familiar and historic iconographic expressions: the Portrait and the Mask. This symmetric succession of two ‘sides’ of the same coin is projected towards two diametrically opposing temporal and geographic latitudes. On one hand, there is the portrait of the old continent, with its most classical, consciously symbolic physiognomy, that was intended as the status of the aristocracy who, as proof of their noble lineage displayed images of their forefathers in their homes. On the other, there is the evocative portrayal of ancestors, described through the original masks of Sub-Saharan Africa, or those which were interpreted from a European point of view by famous artists like Brâncuși, Modigliani, Giacometti and Picasso. They were inspired, at the beginning of the 20th century, by an infatuation with ethnicity and primitivism, a movement that through ‘La découverte de l’art negre’ revolutionized a cultural landscape that started to change quickly, resulting in an inevitable desire for renewal. In a temporal space, Stella Jean has mounted a ‘gallery of ancestors’ in which wooden masks are alternated with portraits of their western counterparts. A culture involving the meeting and overlapping between art and fashion is also highlighted by the jewelry-sculpture of Pedro Cabrita Reis, Tom Sachs, Enrico Castellani, Jannis Kounellis, Giorgio Vigna, Carlos Cruz-Diez and Ute Decker. All of them were created for the Elisabetta Cipriani Gallery of London and are worn on garments embellished with hand-embroidered details and feathers. She has created a balance that oscillates between the exaggerated realism of the portraits and an utmost desire for abstraction, and is moderated by the lack of expression of the masks, in which the jewel-work of art plays a role of provocative synthesis. Artistic expressions that in spite of their apparent diversity make the association between illustrious ancestors, historic personages and posterity possible, underscoring the strong sense of social identity through the value attributed to the memory of ancestors and family ties, in order to preserve their traditions, amidst pagan worship and pleas for protection.  The worship of ancestors becomes a global status and summarizes the conventions that now form the basis of social values: just as only the most worthy members of society were entitled to be painted, so important representatives of the community had the right to wear masks and be portrayed iconographically.
A connection point, possibly a guarantor and a guardian of this ‘gallery of questionable ancestors’ is the figure of the ‘carabiniere’, an immediate reference to Italy and to the Italian roots of the fashion show and the collection. 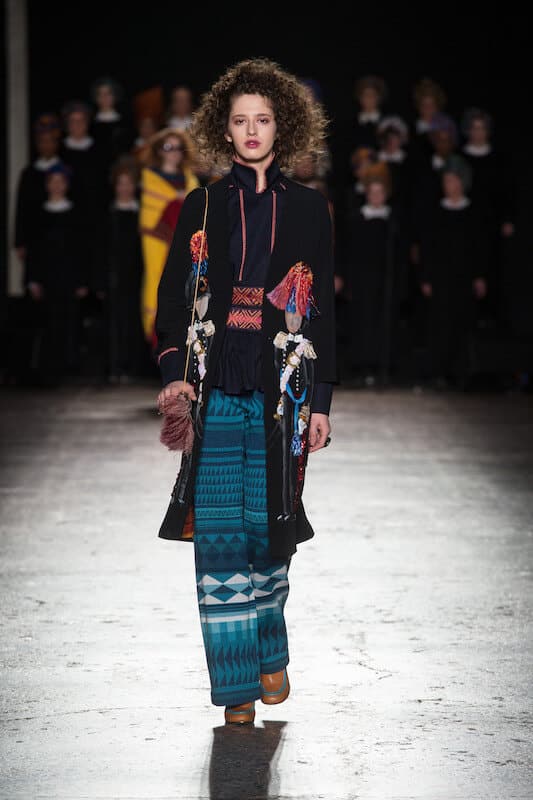 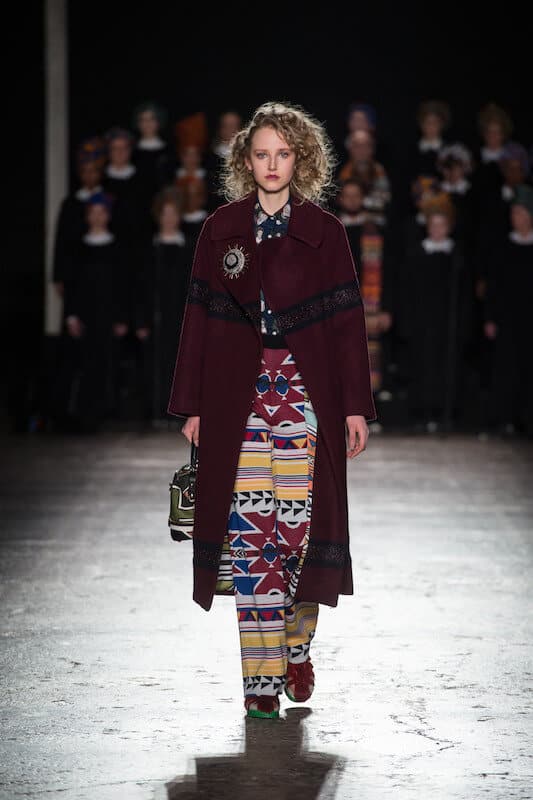 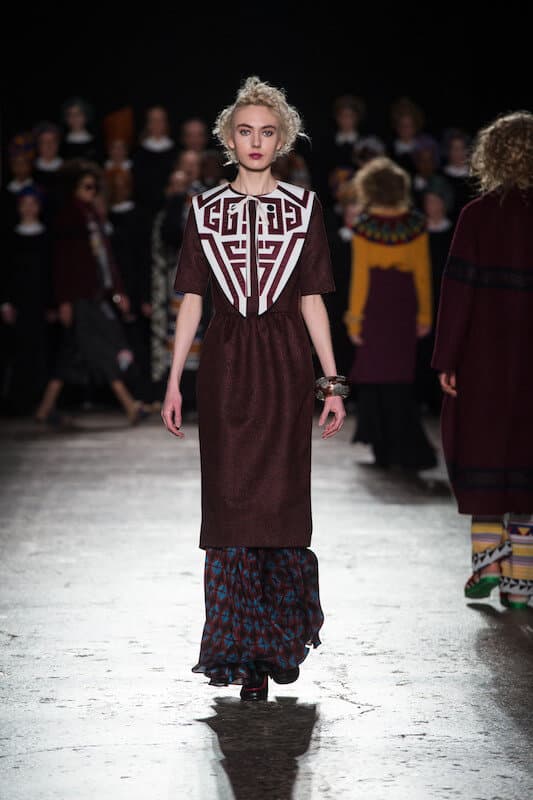 Thanks to the creation of cross-functional teams, locals entrusted with studying and evaluating regional skills, and the expertise of the cultural and artisanal productions of people around the world with whom Stella Jean collaborates, several garments featured in the collection were created using an innovative, sophisticated recycling technique known as the ‘Fluffy’ technique. An artisanal, manual process applied for the first time to an item of clothing. The result, a first-ever for this area, is a finished textile product, entirely recycled from industrial mass market rejects, whose identity we will keep secret in order not to influence judgment but also to prevent that attitude that inevitably discriminates against any garment that is not produced in Italy.

Printed fabrics; embroidery using the patchwork technique, thread embroidery or embroidery embellished with pearls or the application of feathers or fur

Plexiglass clutch embellished with coloured feathers made in Haiti in 3 variations in collaboration with Kenyan-American designer Carol Muthiga;

Flat, embroidered slippers emblazoned with stones, and with suede uppers with embroidered patterns and fur applications;

In flannel, cotton and wool

Elisabetta Cipriani and Stella Jean: a creative parallelism between fashion and art

“Meeting and exchanging ideas are essential starting points,” says Stella Jean, and Elisabetta Cipriani echoes this sentiment. Each sculpture-jewel starts from a meeting with an artist and a process of creative research aligning Stella’s creations with the artistic jewelry created for the Elisabetta Cipriani Gallery.

The main artists who collaborate with the Elisabetta Cipriani Gallery include:
Adel Abdessemed

Several projects by the Elisabetta Cipriani Gallery can be found at museums and private collections all over the world. These include the Musée des Arts Décoratifs in Paris, the Museum of Art and Design in New York, the World Jewellery Museum in Seoul and the State Hermitage Museum in St Petersburg. The next appointment with the Elisabetta Cipriani Gallery London is scheduled to be held at Design Basel from 13 to 19 June 2016.For more information visit www.elisabettacipriani.com 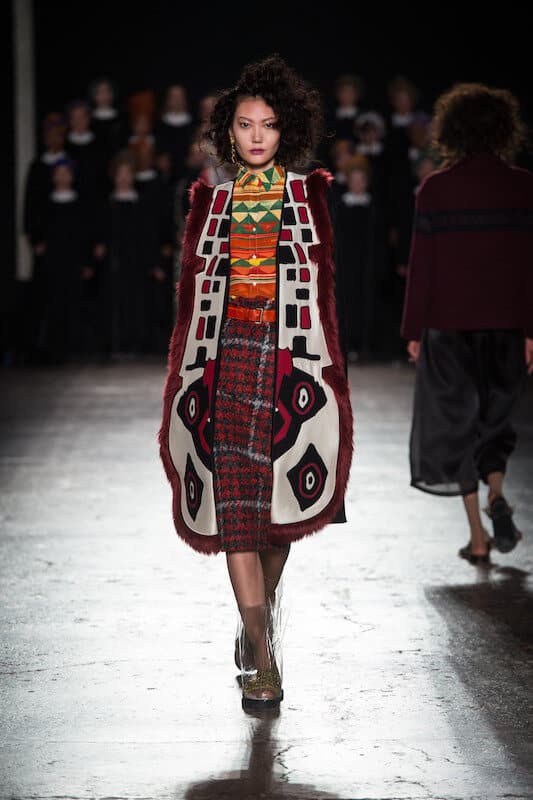 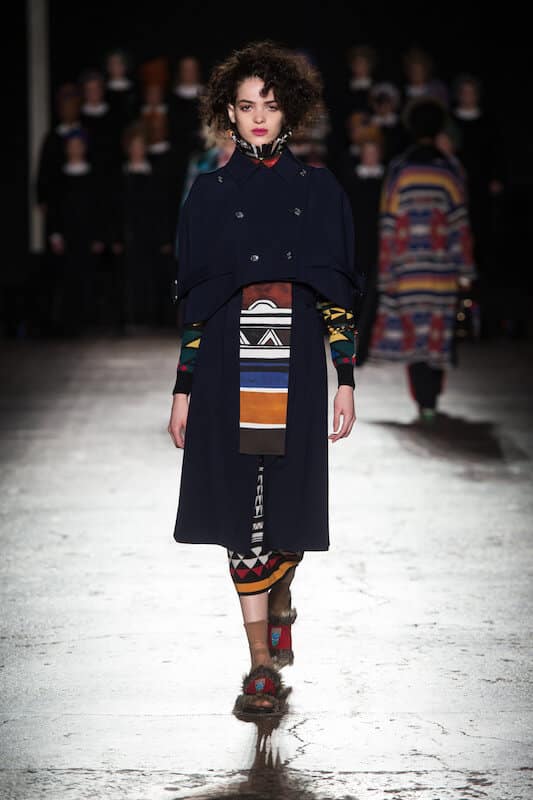 Stella Jean and Carol Muthiga: a synergy created under the auspices of Vogue Italia

Both winners of “Who is On Next?”, the talent scouting project conceived and organized by Vogue Italia and Altaroma, Stella and Carol also have a lot of other things in common. Their origins, the promotion of Made in Italy, their strong attention to the inestimable heritage of the time-honored skills of local Haitian and African communities and their tireless support of women’s empowerment. A duality of souls and skill that are intertwined and bound up in their proud, unique journey.

ONE, NO ONE AND ONE HUNDRED THOUSAND KILOMETRES

Stella Jean collaborates with African and Haitian artisans, based on the principle of increase in value, economic impact and respect for the territory, resources and traditions of the local communities, who must be supported, while at the same time preserving ancestral knowledge – often at risk of extinction – while opposing the debasing effect of imperialist homogenisation. All of this is aimed at generating commercial enterprise and self-sustaining local communities, highlighting the women’s driving force by fostering awareness and pride in their resources, and triggering a mechanism of independence that dismantles the ruinous aid-dependent system. These women can then support their children and make decisions that will bring them outside their planned path of subordination. Emphasis is placed on the fact that real sustainability is not sourced externally but, with the proper organisational support, born within each village in order to confer a new sense of global dignity.

Thousands of kilometres, consisting of meetings and storytelling are travelled, and then followed up by carefully researching local traditions, with the objective of achieving bilateral growth.  Stella Jean travels from Burkina Faso to her beloved Haiti to develop parts of her collections; her aim being to observe, listen and change the mystified perception of these countries through fashion. Countries which, contrary to common belief, are, in fact, capable of generating objects of sophisticated elegance, created in ateliers at the feet of Baobab trees, where training is based on stories told by the elders, and implemented by the patient hands of women, whose empowerment results in the economic recovery of an entire village.

Depending on their abilities, skills and means, each individual or artisan contributes to social production. This is based on the application of collective knowledge and organised around a bottom-up approach, designed to eliminate the relegation of the third world workforce offshore. These are the premises that enabled Stella Jean to discover unique treasures, such as age-old fabrics created in Burkina Faso by local weavers, Bogolan from Mali, a fabric traditionally dyed with fermented mud, and materials such as papier-mâché, fer forgé metalwork and ox bone crafted by the most skilled artisans of Jacmel, Port-au-Prince and Croix-des-Bouquets, with whom the designer studies and designs these pieces directly during her research trips, combining Italian know-how with local skills, thus serving as proof of how fashion, and not just aesthetics, can evolve into an instrument of counter-colonisation, and become a vehicle for, and expression of, economic, social and ethical growth and enfranchisement.