I missed Pirelli calendar, I missed its aesthetic perspective, the aesthetic that I found in Peter Lindbergh images that will probably mark forever, with the black and white grace and beauty, a point of no return in the calendar history .

Lindbergh, the “German” teacher, was able to donate to Pirelli calendar, an aura of eternity that sublimates a simple advertising tool in a new alphabet with its own language, able to narrate and interpret several periods with his own point of view, where the woman and her body becomes an universal language.

“During this Era, when women are represented as ambassadors of perfection and beauty, I thought it was important to remind everyone that there is a different beauty, more real, authentic and not manipulated by advertising or by other things. A beauty that talks about individuality, about the courage to be yourself and the sensitivity. ” 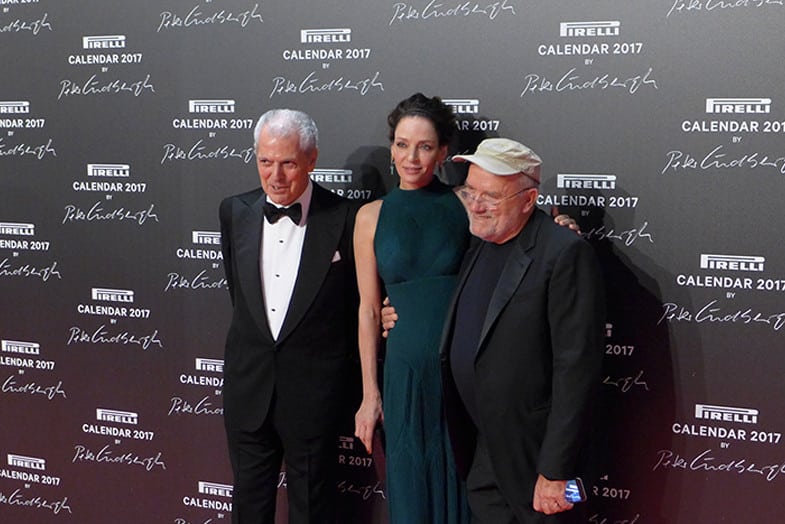 With these words the photographer has confirmed his calendar concept and its title “Emotional” , explains how Lindbergh wanted to “create a calendar not about the bodies perfection, but about the sensitivity and the emotion, stripping the soul out of the subjects, which become even more naked. ”

In Hotel Salomon de Rothschild, in the heart of Paris, during the morning , in a crowded room with 800 reporters, the press conference was focused on the photographer, Uma Thurman, Nicole Kidman, and Helen Mirren, that were talking about beauty and image value.

“The goal – Lindbergh states – was to portray women in a different way: I did it, by calling actresses who had an important role in my life and photographing them, approaching to them,  as much as possible. As an artist, I feel the responsibility to liberate women from the eternal youth and perfection idea ​​. The ideal of perfect beauty promoted by society is unattainable. ”

Uma was the brightest answering the questions and she certainly showed how her beauty, as well as physical, is part of something that goes beyond, exceeding the statuesque Kidman and Mirren, who were also gorgeous.

The Cinema connection, as the basis of this ” psychological deconstruction of cinematographic image” , results in the traditional gala dinner celebration with the new calendar presentation, precisely located in the ‘Cité du Cinéma’ of Saint Denis, the most important Parisian studios of Europe.

After the red carpet, very crowded with photographers, we were able to stop for a few minutes to give a personal greeting to Uma and her manager Jonathan Sanders. In that moment, I had the pleasure to tell her what I personally thought about her beautiful “press conference “and she listened, appreciating my sincere opinion, with kindness and greatness, as a true star, and this made me really happy.

The dinner passed quickly, while we were entertained, during the meals,  by the making of vision of the shootings and the final concert by the great master “Nicola Piovani”, Oscar Prize for the soundtrack of “Life is Beautiful” film, with his Orchestra , he retraced his spectacular musical route  alongside the cinema history, which saw him signing some of the most important soundtracks.

The evening ended with a dance floor by Ben Dj, which once again was able to retrace the dance music history with his personal and creative cut. All the guests were entertained and were dancing in an elegant and relaxed atmosphere, as it should be in the best “club” of the world.

Pirelli is giving its best and is probably one of the best brand experience examples, breaking the

consolidated rules and giving a lifestyle concept where technology and aesthetics can be redefine in several unimaginable interpretations.