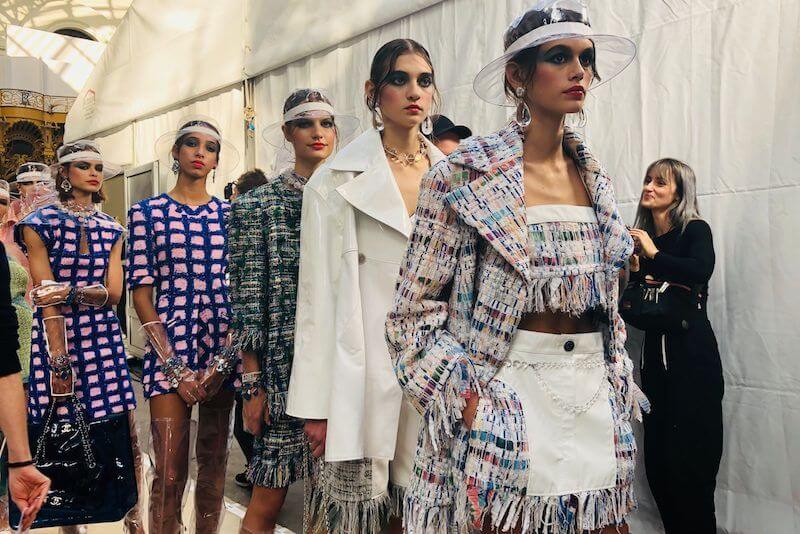 Paris has already showcased some of the best streetstyle looks we’ve seen.
As the Spring 2018 collections debut at Paris Fashion Week, we’re spotlighting the standout looks from the top runway shows of the week.

From Miu Miu unique style held  to a backdrop of six waterfalls at Chanel: here pick their highlights from the Paris shows .
What About Miu Miu?
The show opened with three cropped trouser looks, each with a flash of neon socks in sandals. Lace dresses were layered over stripe tops and prints clashed. The set consisted of a red brick patio, white plastic garden chairs with pastel sponge seat pads.
Louis Vuitton was Also incredible:

Nicolas Ghesquière showed his SS18 Louis Vuitton collection in the medieval foundations of the Louvre Palace in the basement of the Louvre museum. Billowing sleeved tops and embroidered waistcoats that laced up at the back were inspired by 18th century French aristocratic garments and Louis XIV, the Sun King .

The Rococo, the epoch where fashions for embroideries reached their peak, was evoked in a silver-and-blue embroidered jacket that opened the show with its stiff period collar. An embroidered coat with square shoulders cut a fine silhouette in shimmering gold.

We have to talk also about Chanel.

The house tweed in pastel formed the core of the collection, which had a younger feel, heavy on short hem lines. The collection was in harmony with the recent fragrance launch that celebrates Gabrielle Chanel’s life before she became ‘Coco Chanel’.

Ljuba Rizzoli: a Life Full of Love, Luxury and Fashion