The Spring/Summer 2021 Collection by Emporio Armani “Building Dialogues”of openness to the other and to the world. by Maria Zota 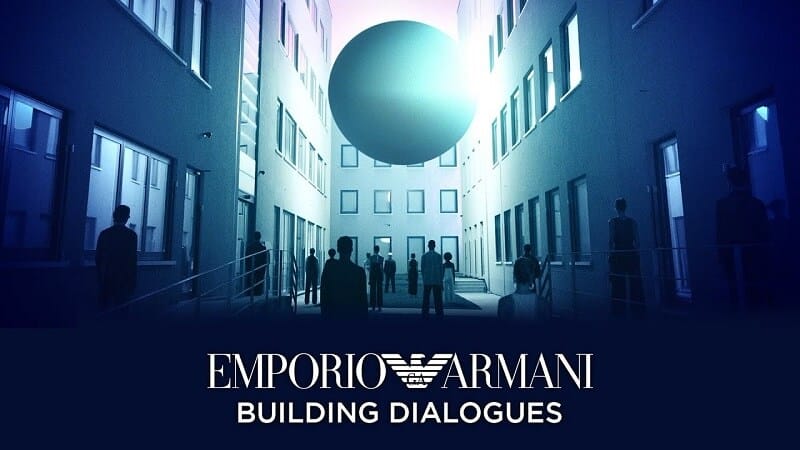 The Spring/Summer 2021 Collection by Emporio Armani “Building Dialogues”of openness to the other and to the world.

I am very excited to talk about this amazing Emporio Armani concept.

With a video shot in that iconic place of the city that is the brand’s headquarters, in via Bergognone, Emporio Armani brings to the stage a collection that is also entertainment, support for the arts (thanks to the participation of many characters, from etoile Germain Louvet to actress Alice Pagani) and it represents an invitation to build dialogues as “bridges” to other worlds.

So what is the main idea of Emporio Armani dialogues?

Reading the press release of Emporio Armani , is clear that in a real or imaginary city, groups of people move around, ready to experience an expected event.

They walk in an orderly, conscious but frenetic way, and their light dresses, in cuts and fabrics, integrate perfectly into the urban landscape.
When the sun goes down – which brings with it colors, graphics and strong sound suggestions – streets, suspension bridges, large stairways are animated by an unusual movement.

The luminous entity, as a future evoked by the community, floods the urban landscape where people, stories, talent and vision meet and connect.
So here we understand the deep meaning of dialogues.
I personally think that this atmosphere is simply an excellent way to express the message and the concept of Emporio Armani.

What I like the most is that in the men’s and women’s collection for spring summer 2021, presented with a closed-door fashion show entitled ‘Building Dialogues’ as part of Milan Fashion Week, everything is weightless, almost impalpable.
His and hers wardrobes dialogue without overlapping, with the same spirit. They share the same need for lightening, which dematerializes and even illuminates black.
The neutral and fresh colors move from beige, grays and almonds to find the purest expression in the shades of white and blue.

So what is really the concept behind this idea?

Emporio Armani combines the musical and visual art of Frédéric Sanchez with the architecture of the headquarters in via Bergognone, between Armani / Silos and the new offices.

The architectural context, with its buildings, becomes a dynamic surface, container and content. Together with the protagonists of the video and the viewer, it contributes to ‘building’ symbolic dialogues of openness to the other and to the world.

And what can I say regarding the video?

In the video directed by Leandro Manuel Emede and Nicolò Cerioni, in addition to the models, characters belonging to the worlds that have always been linked to the great community of the brand will wear Emporio Armani clothes.

What is the reason of this choice?

This is a choice that wants to be a symbolic gesture in support of those arts – music, dance and acting – which have been particularly penalized by the long lockdown period and are still in difficulty today.

Now is time to focus on the Collection itself, because an aesthetic  is faithfully and punctually reflected in the collection: light dresses, suits with relaxed lines, fluid overcoats, shortened blousons, wide trousers and maxi shirtdresses in this iconic palette, which touch the body without ever tightening it, which speak of delicacy and timeless elegance.

An impalpable dialogue between today and tomorrow, tradition and future, embodied by the national and international faces that best project us to the world that is coming.
Now, rendezvous on prime time TV on Saturday 26 September to learn about the second chapter of the Armani revolution.

Therefore I really understood and appreciated Building Dialogues as the video that talk about the Emporio Armani men’s and women’s spring / summer 2021 collections, and which was online on emporioarmani-buildingdialogues.com, the dedicated mini-site and on the brand’s social channels.

It is clear that, for the spring summer 2021 collection, Giorgio Armani silhouette, both feminine and masculine, is essential, soft, fluid: a fusion of pure lines and neutral colors – gray, beige, black, blue – that light up with occasional geometries, with tone-on-tone effects that never prevail over the rest.

What emerges is the personality of a woman and a man free from aesthetic conventions, careful instead to be themselves through what they wear. Whether everything is mat or sparkling, it is the sense of measure.

Giorgio, the great Milanese designer has chosen a silhouette, both feminine and masculine, essentially soft, fluid: a fusion of pure lines and neutral colors – gray, beige, black, blue – that light up with occasional geometries, which teem with rhythmic patterns, following an idea of ton sur ton that is real and metaphorical, and never prevails over the rest.

The Spring/Summer 2021 Collection by Emporio Armani “Building Dialogues”of openness to the other and to the world. by Maria Zota